Switchmate Light Switch Review – Installs quickly but not so smart.

Buy it on Amazon – http://lon.tv/73e8c (affiliate link) – The Switchmate installs over existing light switches and allows for remote toggling via an app. But it doesn’t work with smart homehubs. See more IOT Devices: http://lon.tv/iot and subscribe! http://lon.tv/s

UPDATE from Switchmate – they wrote in to say that they are working on bringing smart hub functionality to the device.

This one I found tough to decide between a three or four star review. But because it functions as described I am going to give it four. It easily sticks to a light switch via magnet (in my case a rocker switch) and it will turn off and on lights on command from a paired mobile phone via an app. There’s also a timer that can be programmed from the app to have the light turn on and off at specific times. Installation really is as simple as described.

But don’t call this smart – it really is just a remote control and timer for a light switch, nothing more. It does not connect to any of the popular automation services like IFTTT, etc. like the Belkin WeMo and other similar products do. Nor is it compatible with any of the emerging connected home hubs like Apple HomeKit or whatever it is that Google is putting together. It also doesn’t work when outside of the home – the paired phone needs to be in bluetooth range of the switch for it to work.

So from the standpoint of the product being smart it’s not. It’s relatively dumb because the hardware doesn’t support any of the standards emerging in the iOT marketplace. Maybe it can be made compatible in the future with firmware updates, but for now you won’t be asking Siri, Alexa or Google to turn your lights on or off with it just yet.

And that of course brings us to price. At $40 each it’s prohibitively expensive to outfit a home with a bunch of these. $20 maybe, but $40 feels a bit much for something that’s very limited in its current capabilities. This is especially noteworthy as there are products from Belkin and others that, while requiring more installation, are standards compliant and a bit smarter than this device is currently.

Visit the Lon.TV store to purchase some of my previously reviewed items! http://lon.tv/store

Read more about my transparency and disclaimers: http://lon.tv/disclosures

Want to chat with other fans of the channel? Visit our forums! http://lon.tv/forums

Want to help the channel? Start a Patreon subscription!
http://lon.tv/patreon 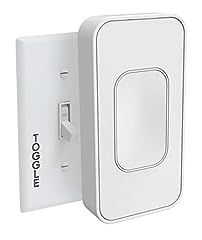 1 SECOND SETUP requires no tools, no wiring and no professional assistance, and all batteries are included! Attaches magnetically to the screws in existing wall plates – simply snap in place and go! SNAPS OVER TOGGLE STYLE LIGHT SWITCHES and ideal fo... (as of October 19, 2020 - More infoProduct prices and availability are accurate as of the date/time indicated and are subject to change. Any price and availability information displayed on [relevant Amazon Site(s), as applicable] at the time of purchase will apply to the purchase of this product.) 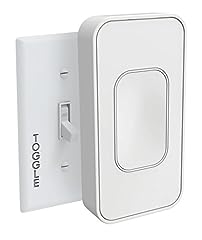 Instantly snaps over existing light switches Automatically turns on lights as you arrive home or enter rooms Timers- turns lights on/off automatically even when you’re away One-second install: no tools or wiring Phone & Wall switch control Portable –... (as of October 19, 2020 - More infoProduct prices and availability are accurate as of the date/time indicated and are subject to change. Any price and availability information displayed on [relevant Amazon Site(s), as applicable] at the time of purchase will apply to the purchase of this product.) 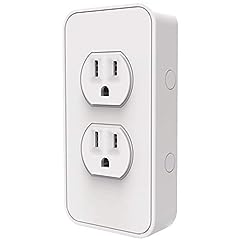 1 SECOND SETUP requires no tools, no wiring and no professional assistance. Plugs directly in existing power outlets, simply plug and go COMPATIBLE WITH AMAZON ALEXA AND GOOGLE HOME for easy integration with your existing home assistant and voice con... (as of October 19, 2020 - More infoProduct prices and availability are accurate as of the date/time indicated and are subject to change. Any price and availability information displayed on [relevant Amazon Site(s), as applicable] at the time of purchase will apply to the purchase of this product.) 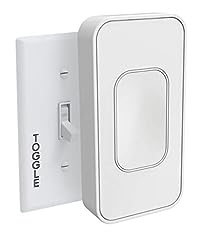 This Certified Refurbished product is tested and certified to look and work like new. The refurbishing process includes functionality testing, basic cleaning, inspection, and repackaging. The product ships with all relevant accessories, a minimum 90-... (as of October 19, 2020 - More infoProduct prices and availability are accurate as of the date/time indicated and are subject to change. Any price and availability information displayed on [relevant Amazon Site(s), as applicable] at the time of purchase will apply to the purchase of this product.)

Can you have more than one box connected?

i think you could use Bluetooth extenders abd then use it out side your house?

You should buy a couple GE WeMo bulbs. They’re only 10-15 per bulb and they work with SmartThings, IFTTT, etc…

Would be good to try out if you’re just dipping your toes into the home automation world.

I love when you discover some very geek stuff like This !

Having problems with the timers… switch comes on at the correc time but does not shut off.

Yet another great review.

Yep, this is literally the ONLY thing I need it to do. ( no sarcasm)

I assume not z wave ?

what a useless gadget

One feature of the Wemo switch that I like is the ability to turn the light on and off randomly when I am not home. Does this thing have a random mode? I’m not a fan of timer switches that turn on and off at the same exact time each day.

I agree that the lack of smart connections this makes these fairly useless. I had seen these and thought that is a good idea, easy to install and easily moved. But I would want them to work with IFTTT and my Echo. When they get that capability then I think they would be an interesting purchase.

Does it actually store the timer settings on the device or is it only stored on the mobile phone? I ask because I’ve purchased LED RGB bulbs that had apps with timer settings but it required the mobile phone be in range and on for the timer to work because the settings were not stored on the LED bulb itself. Also, I see you using it with a toggle switch, would it work with a flip switch (peg type)?

I bought one and the app doesn’t give you a chance to scan for device. the site says 4.4 android or later, I’m running 4.4.2. I have sent 2 emails and no response. not very good customer service.

perfect for turning on and off the front porch light every night  …. that’s about it